Elon Musk (Through a Glass Darkly) 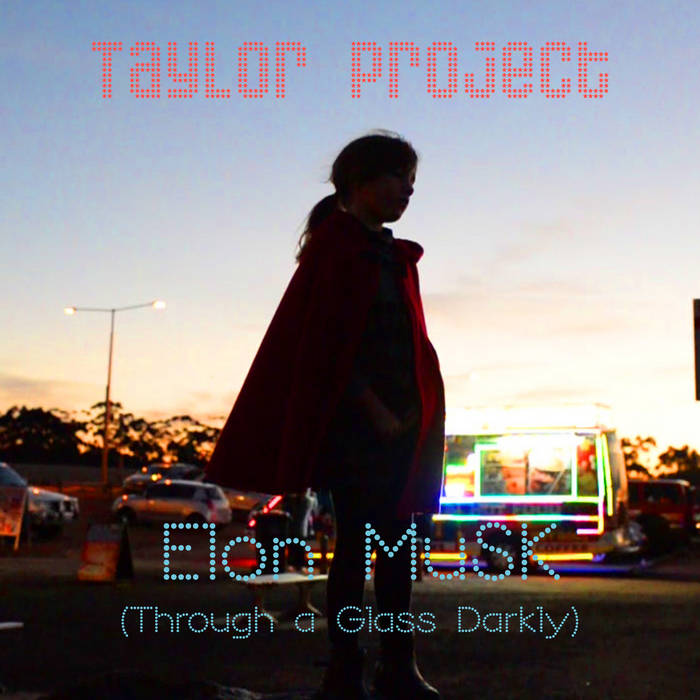 See film clip here: www.youtube.com/watch?v=XuI990hpfB8. This track was written for the March 2017 Lomond Hotel Writer's Block. The prescribed theme of that month's songwriting event was "the planet". As it happened, the theme was well timed as Sarah had, around the same time, finally asked "who is Elon Musk?" during a grownup conversation. She'd heard the name bandied around in the preceding months but perhaps missed several witty conversational punchlines, not quite knowing who this person was. She was advised to read this blog post:

The song was written shortly after reading this informative post, and, incidentally, while sitting about the house watching a library DVD of “Carry on up the Khyber”. The movie served unintentionally as a reminder of how quickly new things get old. (For the record, it was still pretty funny).

We recorded up in Elmore in May 2017, and there was lots of help from “JJJ” – i.e. Juliette, Jason and Jen. Andrew did the mixing. We basically took an Agile development framework (without calling it as such), aiming for a quick turnaround from inception to production. Hence the release of this Taylor Project track, along with “Unending Dawn”, in June 2017 as a pair rather than as part of a full album.

So, who is Elon Musk? Well, he is sort of a Silicon-Valley-Great-Gatsby-billionaire-optimist-pessimist on a mission to Mars. In the current state of world affairs, wherein one chooses between a variety of rich weirdos in lieu of institutional progress, he is the best rich weirdo going. Or, at the very least, the most interesting. He sports a similar reverence for the unfriendly but immutable power of biology, as that put forward in several Taylor Project songs. He has made a bit more money than the Taylor Project though.

Musk initially made (lots of) money from PayPal, and more recently has made news as the head of the Tesla electric car and solar panel companies (a mass installation of the latter was offered to the South Australian government early in 2017). In 2002 he founded the SpaceX company, with the express mission to bring human life to Mars. SpaceX are now launching rockets successfully. In spite of the innovations in alterative energy, Musk still believes that humans should hedge their bets on a home planet. Also, he sees A.I. as a genuine threat to humans, not just a handy way to spend more time fiddling with your phone.

This mix of optimism and pessimism is reminiscent of much older migration stories: wherein the journey is made with no expectation of return, and only vague expectation of success, but is made nonetheless, and with some urgency, as “to Ellis Island dressed in rags” with “only one way tickets to be found”. Why bother? We don’t know, but this doesn’t matter when we are programmed to try. Elon Musk refers to DNA as “software”.

Whatever happens in the future, the Taylor Project probably won’t be the ones going to Mars. We’ll be the bodies long gone and the bones in rear view mirrors, our 1980s and 1990s tinged visions of modernity a humorous footnote in the history of the future. Indeed, the cycle of life dictates that we walk ceaselessly towards the future knowing full well that we will never reach it. We see the future “through a glass, darkly”, as per Corinthians 13:12. This oft-quoted Bible verse refers to the idea that we mortals glimpse our position in a wider scheme of things but don’t really comprehend this until (Christians thought) we die, understand completely how obvious it was all along, but can’t tell anyone. Bother! “Now I know in part; but then shall I know even as also I am known”: that’s the big plot twist, a la Phillip K Dick’s version, “A Scanner Darkly”.

On a less pessimistic day in the history of the future we might read the Bible verse, and for that matter the advice of Plato or the Great Gatsby, as telling us that a blurry vision of the future must still be sought after, a green light that is inherently worth chasing:

“Gatsby believed in the green light, the orgastic future that year by year recedes before us. It eluded us then, but that’s no matter—tomorrow we will run faster, stretch out our arms farther. . . . And then one fine morning—So we beat on, boats against the current, borne back ceaselessly into the past.”

Ask any teenager who’s stoned
To look at the stars and they will know
There is no up, there is no down
Just our bodies pressed against the ground
On the ceaseless giant spinning round

The only home I’ve ever known
Has my own fingers, my own toes
Every piece of wet cement
I wished I’d put my hands in it
Because like a captain I will go down with this ship
I see the future but it’s through a glass darkly
It’s a green light that recedes before me year by year
It’s a planet with my bones in it in rear view mirrors

[It would be so exciting to wake up in the morning and think that’s – that’s what’s happening].